Owners Chris, Edgar, and Daniel flung open the doors to the hotly anticipated new Mexican Taqueria Tres Carnales on Thursday night. Announcing their opening on Twitter (@TresCarnales) earlier in the day, my wife, Fojoy and I decided to head down and check it out.

The name, Tres Carnales, inspired some conversation on the drive. What could it mean? I guessed it meant 3 Carnies, but after arriving it became obvious that nobody was going to get on the microphone and yell “DOES ANYONE WANT TO GO FASTERRRRRRRR??” Plus there were no opportunities to win a giant stuffed armadillo through games of chance. A more experienced blogger might have remembered to simply ask what it meant, but I got distracted by the smell of roasting pork. 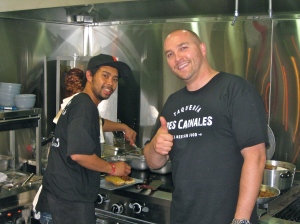 Now I know what you’re thinking…. what kind of evil S.O.B. reviews a new restaurant on their opening night, when they’re trying to iron out the kinks and feel their way around an entirely new space, menu, staff, and equipment?

This jerk, that’s who. 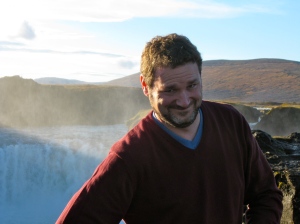 I love good tacos, and with less than a handful of places in town making authentic, home-made Mexican favorites, it was a given that I’d be trying this spot out in a hurry. We finished up the little projects we were doing around the house and set a course for downtown, Rice Howard Way to the exact.

For those readers outside of Canada, especially those in the south-western United States, you may be a little confused as to the excitement at a simple Mexican Taqueria opening. You know how there is a great little Taqueria on every street corner and street middle in the USA? Well, I remember a few years ago one of our local free news rags printed a “Best of Edmonton” list and the winner for best Mexican was……… TACO BELL! How embarrassing. So getting some authentic choices is exciting. 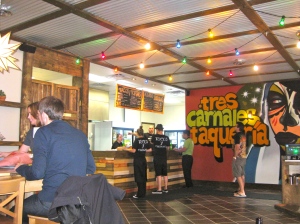 With the soft opening obviously being designed to avoid getting completely overwhelmed the first few nights while they figure out a routine, we tempered our expectations and prepared ourselves for slow service, confusion, and long waits.

To our surprise, things went quite smoothly. Although when I asked Chris – one of the owners – he said it sure didn’t feel like it.

The menu required Daniel to do a little explanation – no fries supreme or tater tots here – then we ordered (more on the ordering system later) and sat to take in the atmosphere. In the expected Mexican fashion, we were greeted by loud music, loud colors, and loud flavours. 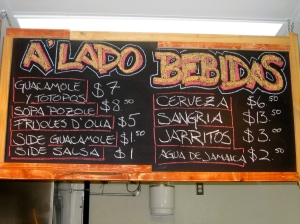 The system for ordering may take some getting used to for Edmontonians. It was very similar to a Mexican restaurant we visited in Chicago recently, celebrity chef Rick Bayless‘ XOCO.

Upon entering, you line up at the front till and order. You can pay now for take-out, or if eating in, you can run a tab in case you order more food/ drinks. You’re given a card to identify your order and you head to your table.

After only a couple of minutes our starter of guacamole with fresh made tortilla chips arrived. The guacamole was very good; a little chunky with a bit of tomato and not too heavy on the garlic. Just the way I like it. In fact, Fojoy commented that it’s very much like my own version of guac. The real difference maker was the fresh tortilla chips though. Warm, crispy, salty, and delicious.

Shortly thereafter, our mains arrived. Fojoy devoured the Al Pastor Torta; a slow roasted pork sandwich with tomato, cilantro, and guacamole. The bun was soft and perfect for a sandwich, and the cheese was grilled right onto the bread. The pork, marinated and spicy, was a standout. The little bit of cilantro added an enjoyable freshness. Definitely a twice a week kind of sandwich. Great Tortas at Tres Carnales, along with fantastic Bahn Mi sandwiches at V’s up the block makes Rice Howard Way the go to spot for sandwiches.

I went with Daniel’s recommendation of the Pollo Asado quesadillas. They were very tasty and satisfying. Marinated and grilled chicken melted with cheese on a fresh made tortilla. It was served with an ounce of salsa and both entrees came with a shot glass of beans.

All three dishes we sampled tasted fresh and were quite well prepared, especially considering they had only been open about an hour when we stopped in.

The only complaint was that with the size of the dishes, we both walked away still a little bit hungry. Three dishes plus a Mexican soda came to over $33 with taxes. Maybe a little something on the side of the mains to even out the meal (rice, bigger portion of beans) would be nice.

Overall there are a lot of positives and lots of promise for the future in this new eatery. Here’s hoping these Carnies expand to offer breakfast in the future; I’m sure the chilaquiles will be great.

I was interested to have a second look/ taste after the Carnales have had a week to settle in. And what a week it was! Word of line-ups out the door at lunch and being so busy they ran out of food one day! Nice problem for a 1 week old eatery to have.

I am very happy to report that after evaluating feedback from customers, the owners have made a change to the taco plates. They have increased the meal to 4 tacos instead of 3. There was no leaving a bit hungry this time. You have to love a business that listens to their customers and makes changes to address any concerns. That is commendable.

My wife Fojoy had another Torta, this time Carnitas. Fantastic again… even better than the Al Pastor. I went with the homemade chorizo tacos. Exceptional. It’s obvious quality is not going to be a problem here.

The 2 dishes, again with guacamole y totopos (i could eat that every day), and an agua de jamaica (hibiscus fruit punch) came to $30+ change including taxes. Pretty solid deal.

Do yourself a favour and check out this great bunch of guys serving up a fantastic, fresh meal. Tell them the Baconhound sent you.

Posted on July 1, 2011, in Restaurant Reviews. Bookmark the permalink. 8 Comments.